PPSC PAST PAPER WRITTEN TEST FOR THE POST OF ESE, LABOUR AND HUMAN RESOURCE 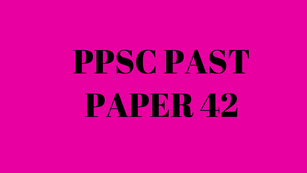 
The sustenance of a person who is born is also written with it. So instead of worrying, just work hard, pray for your parents and have faith and trust in yourself. Allah Almighty will give you the best job. Passing the PPSC exam is a difficult task but the one who works hard succeeds. You should prepare with books and basic general knowledge such as subject related, and also get helped from ppsc past papers 2019, 2020.