PPSC PAST PAPER WRITTEN TEST FOR THE POST OF PLRA PPSC 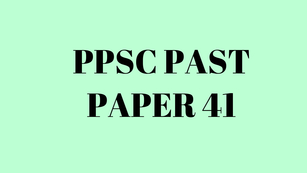